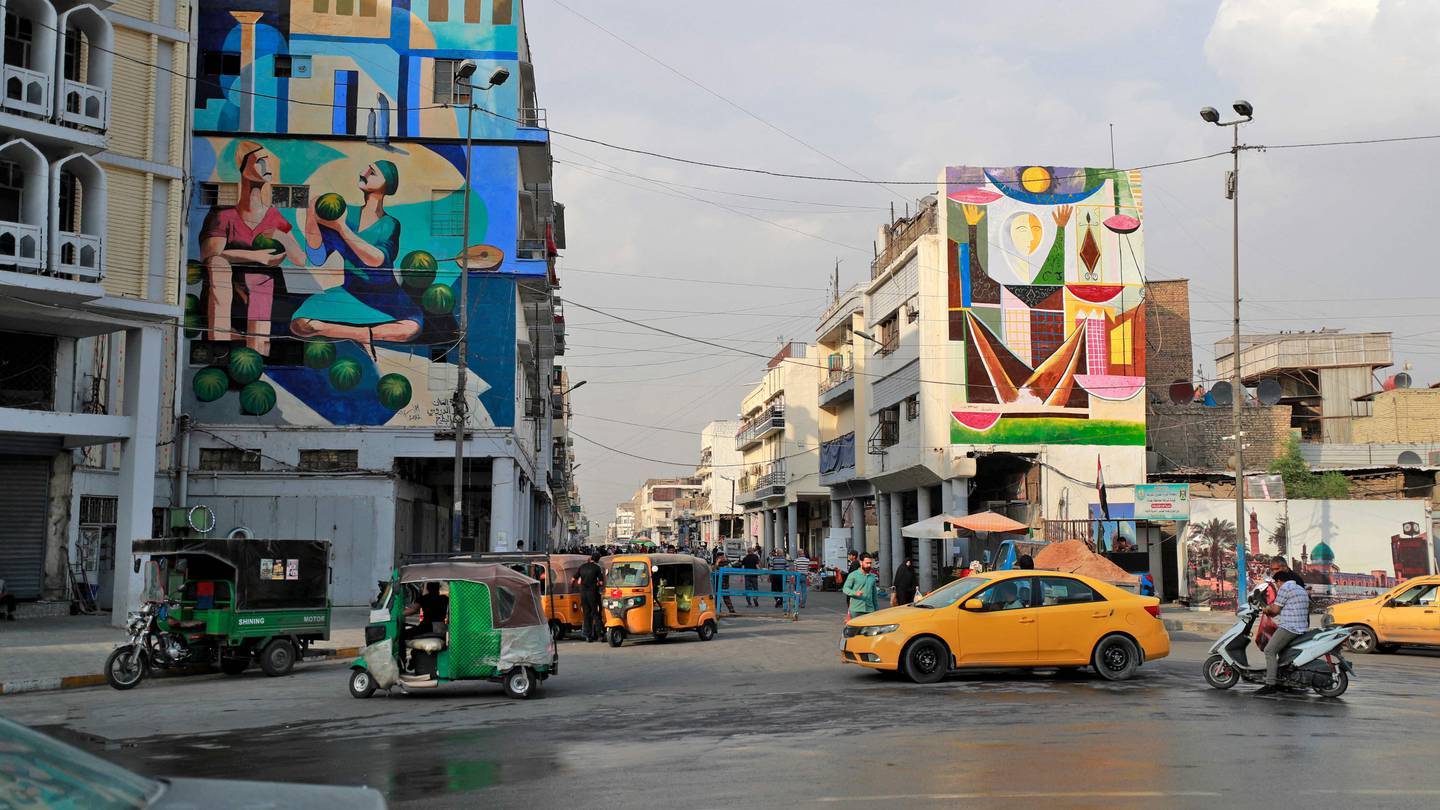 Two of Iraq’s finest paintings of watermelon vendors have been turned into recently completed murals by artist Wijdan Al Majed to beautify Baghdad’s cultural heritage and streets as part of a campaign launched by the city’s mayor.

The paintings belong to Iraqi pioneers Hafidh Aldroubi, who died in 1991, and Jewad Selim, who brought modern art to the country in the early 1940s after studying in Europe. He died in 1961.

Since taking office 18 months ago, Alaa Maan has been keen to reassure public opinion that work is underway to rebuild the city. Nine months ago, he launched an initiative to color the streets of the capital, as well as to raise public awareness.

“If we want to bring Baghdad back to life, we have to revive its old cultural quarters and when it comes back, civilization will come back to the city,” Maan said. The National.

Maan launched the Baghdad Renaissance Project to build trust and cooperation between the state and the public by restoring the country’s artistic history, visible in the murals.

“It is a tribute to eminent personalities who have left their mark on Iraqi society by giving back to the public, the murals depict prominent Iraqi and international human figures,” he said.

Maan, who is an architect by profession, says only art and culture can bring Baghdad back to life.

“People are hungry for change and rebuilding, so when we work on short-term projects such as mural campaigns, the public can see the developments immediately.”

Baghdad has been exposed to the majority of the destruction suffered in Iraq over the past 40 years.

“The impact of the war was felt in its streets. From 2003 until now, we have experienced instability and chaos, which have shaped the social and physical aspects of the country and the city,” he says.

The importance of the Al Sadria market

Al Sadria market in the central district of Baghdad is one of the most popular for fruits and vegetables and is known for selling delicious watermelons, which is why Maan chose both tables.

The mayor’s decision to select Aldroubi’s watermelon vendors was influenced by cultural and arts adviser Zainab Hassan, he says.

Aldroubi, known as the artist of Baghdadi, was one of the pioneers of modern art who expressed his love for the capital through vibrant and colorful paintings of markets and streets.

He captured the beauty of daily life in Baghdad through a new form of art and color that made his paintings stand out.

Al Sadria neighborhood was Aldroubi’s hometown and he had a close attachment to the area as it brought back many childhood memories for him.

The painting is currently on display at the Burjeel Foundation in Sharjah.

Jewad Selim is known as another founding father of modern Iraqi art. He created a new trend by linking local Iraqi culture and international influences in his paintings. Her work shows a female figure raising her arms in the air, surrounded by many shapes.

A crescent shape representing a watermelon is cast on top of his left hand, which many have interpreted as a connection to the fertile crescent of the Middle East.

Both artists depict elements that many people have seen while walking through a Baghdadi market, while zooming in on specific figures and movements that many may not have been paying attention to.

Bringing joy to the streets of Baghdad

Al Majed, an artist and teacher at Baghdad’s College of Fine Arts, specializes in watercolour, but decided to take on this job to bring color to the dusty streets of the city.

It took Al Majed four days to complete each mural.

“Eight days is record time to complete two large murals, the dimensions were 11 meters by eight meters and the wall in the Aldroubi painting had windows which made it even more difficult to paint, but I managed to make it work,” she says.

Al Majed, a mother of three children, is used to exhibiting her watercolor collections in galleries, but not in the streets of Baghdad.

“I wanted to bring joy to the streets of Baghdad by painting these murals. Sometimes when the paintings are in museums and galleries, they may not be known to the general public, but now they are within reach of everyone,” says Al Majed.

His students and colleagues said “it will open the public’s eyes to Iraqi history and culture that has been lost” and help people learn about important personalities.

Al Majed has done 16 murals across Baghdad so far. She is currently finishing a mural depicting Mudhafar Al Nawab, an Iraqi artist and poet close to Aldroubi and Selim.

“Everyone is starting to know who Hafed Aldroubi is, even those who sell watermelons. I was asked a lot of questions while painting the murals,” she says.

Al Majed says she received a lot of attention for the murals due to the subject matter of the paintings and the fact that a woman was painting the walls.

“I was accepted by the company and left to complete the work without any trivial comments,” she says.

As its murals rise high and high in Baghdad’s most famous streets, Al Majed feels like a part of the capital and changes the perception of many.

— Hafidh Aldroubi is the grandfather of writer Mina Aldroubi

Qianlong period vase found in kitchen could be worth up to $186,000

Modern art and the esteem machine