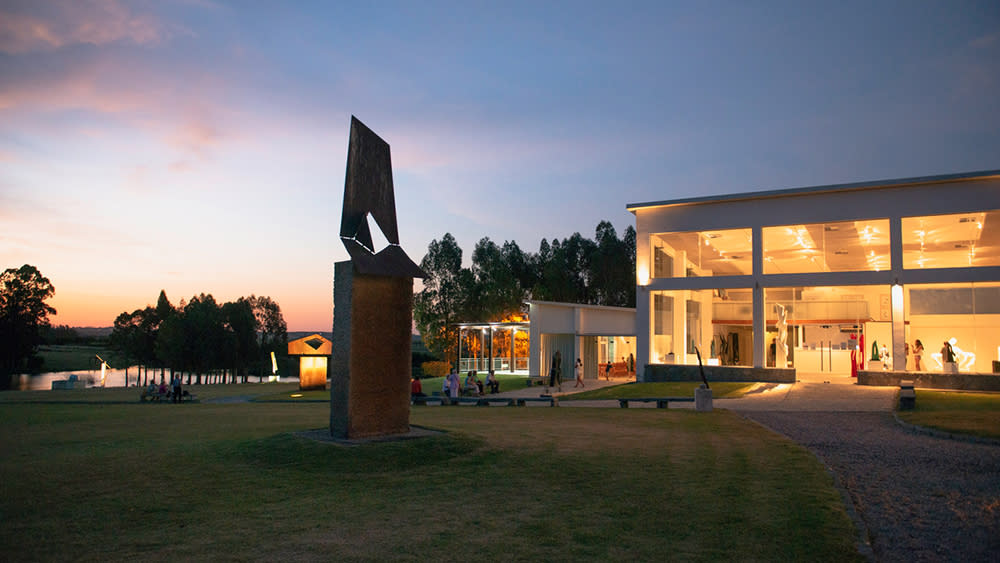 Punta del Este in Uruguay is set to become a beacon for the arts and a key tourist destination with the inauguration of the resort’s first contemporary art museum, the magnificent Museo Arte Contemporaneo Atchugarry (MACA), on January 8.

The launch of an artistic film festival, ARCA, which will run from January 9 to 14, underscores the museum’s mandate to serve all the arts. Perched on the grounds of the Pablo Atchugarry Foundation, the 75,000-square-foot museum designed by architect Carlos Ott overlooks a 62-acre sculpture park and expansive grounds that include a helipad, forests, and an open-air amphitheater. Entrance is completely free.

â€œWhen we created the Pablo Atchugarry Foundation 15 years ago, we conceived it as a meeting place for all the arts with the public. Today we can say that musicians, dancers, writers and visual artists will have passed through here, â€said Uruguayan sculptor Pablo Atchugarry, whose foundation is the main sponsor and driving force of the festival.

â€œWe now have the great opportunity to present the first edition of the ARCA International Film Festival, for which I have the privilege of being your host. In particular, I created a sculpture entitled ‘Arca’ to be awarded as a grand prize to the winning film â€, he continued, adding:â€œ I welcome this festival with the certainty that it will be an extraordinary event for fans of the seventh. art. “

ARCA kicked off with a preview on January 3 at the open-air amphitheater with “Walking on Water”, the exciting documentary by Andrei Peounov on the project The Floating Piers by Christo and his wife Jeanne-Claude. â€œWe had planned 700 seats, but we had to provide more seats for a total of 1,200 guests; it was a beautiful night, â€said ARCA director Mercedes Sader.

The culmination of the Bulgarian-born artist’s dream of ‘walking on water’, the Floating Piers project featured two miles of saffron-colored fabric stretched over floating, interlocking cubes that connected two islands in Lake Iseo to the Italian mainland. It is said to have attracted over a million visitors.

According to Sader, ARCA will be held every two years, first in January in Punta de Este, then in December in Miami, where the Pablo Atchugarry Foundation is headquartered in the United States, during the Art Basel event.

The inaugural edition of the festival features 19 feature films in the main competition from as many countries, Sader said. These films are curated by festival scheduler Sergio Fant, who is also part of the Berlinale selection committee and has already scheduled notable festivals such as Venice, Helsinki Documentary and Trento, among others. ARCA also includes a video art program curated by Laura Bardier d’Este Arte and Andrea Bellini of the Geneva Biennial of the Moving Image which will present the best works of the Biennale.

ARCA will operate the outdoor amphitheater, an indoor screen with a capacity of 100 seats and a third exclusively dedicated to video art projections, also located outside. Given the health protocols in force, these outdoor screens are ideal.

â€œUruguay has a 90% vaccination rate and it’s summer here now,â€ said Sader, who lamented the filmmakers were invited but was wary of changing border restrictions fueled by the pandemic in their respective countries.

A two-day conference series launches the industry section of the festival, overseen by ARCA executive directors Andres Varela and Sebastian Bednarik from CoralCine in Uruguay, as well as coordinator Clara Charlo. â€œWe had to focus on what can be done, given the circumstances,â€ said Varela who added that ARCA was in talks with other festivals, such as Guadalajara in Mexico and Sanfic in Chile, to consider to form strategic alliances.

On January 13, Helena Nosei, Uruguayan representative of the Spanish audiovisual producers’ rights group Egeda, will hold a conference on the industry side of Premios Platino, the annual Ibero-American entertainment awards ceremony, which Egeda supports. This will be followed by a presentation by Martin Astesiano, head of business development for the Qubit.tv platform, who will discuss the company’s editorial line, and finally, a conference by Piero Atchugarry, founder of the Pablo Atchugarry Gallery, to discuss the importance growth of NFTs (Non-Fungible Tokens) in the art world, especially during the pandemic.

The second day, January 14, will feature two lectures in English, starting with Michael Young, President and CEO of the New York Film Academy, who will discuss the academy’s overseas training programs and opportunities for alliances in the region. Next is the ARCA festival programmer, Fant, who will talk about the film selection criteria for the different sections of the festival.

ARCA’s launch comes at an opportune time when Uruguay has become a booming production hub with various in-flight productions, drawn by its security, political stability and relatively COVID-free environment. A cash discount of up to 25%, introduced in 2019, made it even more attractive.

“The Disappearance of the Aitus” (Pauline Julier, 2014)

The best of variety